Posted on September 25, 2016 | Comments Off on New National Buprenorphine Website 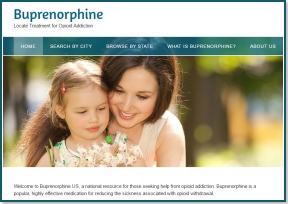 Buprenorphine.US is the newly developed companion website to Methadone.US. Methadone has been in use as an opioid addiction treatment medication for nearly 50 years. In 2002, buprenorphine became available in the U.S. as a new alternative for people suffering with opioid addiction. Since then, various medications containing buprenorphine have been released such as suboxone and zubsolv.

At Methadone.US, we have served over 1 million U.S. visitors since the website’s launch in 2011. Buprenorphine.US will aim to connect many more individuals with qualified physicians who can help them in their journey toward a genuine recovery and improved quality of life.